A NAS (Network Attached Storage) is a complex stand-alone device outfitted with everything necessary not only for storing data but also for sharing it and, with some models, its streaming. Due to convenience and possibilities NAS devices bring into this world, they have become popular among different user groups, from home users through small offices and up to corporate clients.

Generally, the purposes NAS devices are used for can be divided into three categories:

As an independent device, a NAS storage is completed with its own CPU, memory and hard drive components. NAS devices can include one or more disks, which can be extended depending on the model. Several disks in NAS storages are normally integrated into one RAID system. There exists a great deal of different RAID configurations, each having its particular data organization scheme. Depending on the configuration, you can organize a good balance between storage performance, overall capacity and device reliability.

NAS devices are liable to all kinds of data loss common for other data storage media including logical failures of the operating system, effects of viruses and malicious software as well as accidental file deletion. At the same time, NAS storages are prone to their particular data loss situations, like operator's errors during RAID re-configuration or incorrect adding of new disks to the NAS box, NAS software failures or faulty updates etc.

Let's take a closer look at possible logical damages of a NAS storage.

Depending on the vendor, a NAS storage may or may not provide the user with options to select and change its configurations. Professional models, like Buffalo, give an extensive set of options, while Drobo is unlikely to let the user in. Let's assume you have such a choice.

There are several ways of data organization on a NAS device. First, the storage may merely consist of the only hard drive or several drives not organized into one system. From this perspective, it is only slightly different from a computer because it doesn't have a display, a keyboard and a mouse.

Second, NAS drives can be combined into a RAID. A variety of RAID configurations allow creating either a redundant or non-redundant NAS storage. RAID configurations of RAID0 and JBOD are non-redundant. Their data allocation schemas increase overall storage performance but do not provide for a higher level of data safety because they do not use data duplication (mirroring) or parity – a special checksum to calculate missing pieces of information in case of their loss or unreadability. A redundant NAS will be a more reliable solution due to the application of parity or duplication. At the same time, you may lose some percentage of the storage space dedicated for parity or data copying.

Certainly, it's up to you if you want to get maximum space and create a non-redundant storage or would like to be less risky and invest in reliability on account of a redundant configuration. What data recovery experts claim in both cases is to be attentive to your storage. In case of a linear or non-redundant NAS, be aware that its components are not eternal. Additionally, some retailers may supply the box with low-quality disks. Hard drive resources may also be up as the time flows. Concerning redundant NASes, make sure that you react timely to its messages and never ignore the necessity to replace a failing NAS drive.

If the situation requires turning to a NAS support team, draw their attention to the fact that your data is important and call for a backup.

Like other devices, NASes are also vulnerable to voltage fluctuations and power problems. Their outcomes may severely damage the system resulting in the loss or corruption of RAID metadata. The most apparent consequences of the loss of metadata include:

In any of the above-mentioned events you will need to take the disks out from the NAS box, connect them to a computer one by one and start Recovery Explorer to retrieve your data. To bring the box itself back to the working state, you'll have to replace the drives if they have broken down, and only then reconfigure the storage with a new RAID via the web interface. In case of a boot failure, you'll need to return the storage to factory default settings.

Proceeding with manipulations over the NAS box is allowed only after all necessary files are recovered. 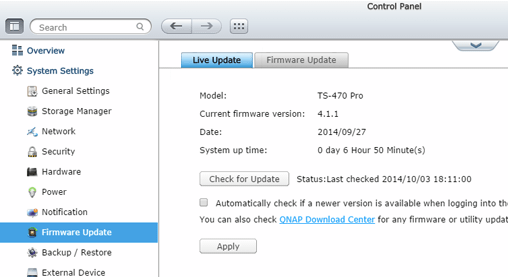 Having faced the problem of a breakdown or emergency condition of a NAS storage, users would usually turn to a support team of the device retailer. One of the problem resolving methods may involve firmware upgrades. This is a good chance to make the storage work again, but at the same time, it's a possible reason for complete loss of the data stored on the device. Upgrades can bring serious modifications incompatible with old data storing methods. In order to bring the device back to the working state, the system may decide to reset NAS firmware trying to set the disk to nil and format the drive to create a new file system.

Please, don't start any manipulations targeted at changing device firmware or storage configurations prior to making a copy of all vital files. If the storage does not let your data be copied, please, turn to a special data recovery center.

It is not a secret that the amounts of data we store are constantly growing, thus, there is always a need for more storage space. It brings the necessity to upgrade storage devices, but the thing is that it should be done with extreme care.

The process of extending the storage capacity overloads disks. A NAS storage switches to the RAID rebuilding mode which gives additional working load. Besides, rebuilding a RAID is a quite lengthy procedure that requires stable work conditions. Possible power outages or voltage fluctuations may bring along fatal NAS failures. It's recommended to power the device using a UPS and prevent data reading operations from the storage during the process of rebuilding. 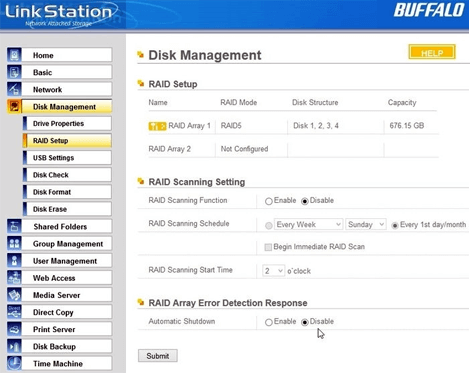 Users may want to change storage configurations for a number of reasons: to build a RAID, to increase storage capacity, to form a redundant RAID configuration, etc.

On the other hand, not every NAS retailer allows altering the NAS scheme on the fly and without endangering user data. Those who don't (Buffalo, for example), cannot guarantee that user data won't be lost after the configuration change. Even those ones who claim safe NAS modifications (like Drobo) cannot promise a 100% impossibility of failures.

The process of changing configurations may pose a serious danger, as it does all operations over a live system. If for some reason more than one disk in RAID5 or more than two disks in RAID6 break down during the rebuild process, the volume becomes inaccessible and its data cannot be read anymore.

Another risk factor is power outages happening before the update is completed which can occur even because of inadvertence, for example, you may catch in the cord while passing by. This may lead to the failure of the RAID controller. In this case, the whole procedure will crash, the storage volume will become inaccessible, and in combination with a complex RAID configuration, you will face firmware problems. The more severe the outcome is, the fewer data recovery centers will cope with such a data loss situation.

Please note that NAS rebuild is carried out in real time over a switched-on storage. Try to avoid using the device during that process. Finally, the less overloaded it is, the sooner the process is up and less time is left for breakdowns.

How can one ensure secure conditions for work with NAS?

Even though NAS is advertised as a safe data storage solution, you should remember that it can still break down at both physical and logical levels. Non-redundant configurations require closer attention to failing drives. Redundant configurations need your attention to the warnings about the storage space and immediate replacement of the failed disk.

Overall, at the very first step of creating storage configuration remember that you may use storage capacity at the expense of safety. Data recovery specialists from SysDev Laboratories consider RAID5 and RAID6 configurations the most reliable solutions which are much more promising from the recovery perspective.

Therefore, you should always think twice and also organize a proper backup routine.